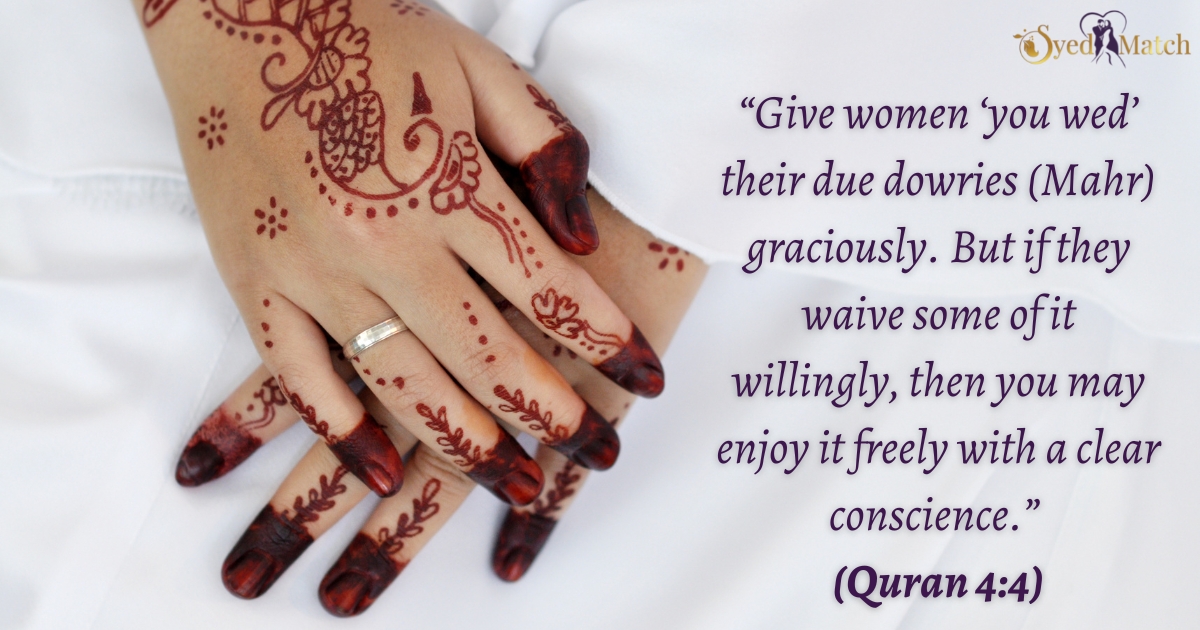 The amount of money or property that a wife is entitled to receive from her husband upon marriage is known in Islamic law as the “Mahr” or “Dower.”

The purpose of Mahr is to permit the wife’s independence and serves as a covert restriction on the husband’s unrestricted right to divorce.

“Give women ‘you wed’ their due dowries (Mahr) graciously. But if they waive some of it willingly, then you may enjoy it freely with a clear conscience.” (Quran 4:4)

Any form of money, asset, or service, even memorization of the Qur’an, might be considered the Mahr. This suggests that it should be made simpler for the groom in light of his circumstances. The Mahr only belongs to the wife after the marriage is consummated. There is no set price for the Mahr, although according to Sunnah, it can be worth up to 400 dirhams of silver, as was the case with the Mahr of the Prophet’s wives and daughters (peace be upon him).

Unquestionably, to seek a large Mahr in an extravagant, exaggerated, or excessive manner is distasteful, if not prohibited outrightly. Sometimes, a good relationship falls apart because of unjustifiable demands with regard to Mahar. Exorbitant asking amounts for Mahr also create unnecessary hindrances in the path to marriage.

The Islamic law does, however, hold the concept of Mahr to be empowering towards women and it is a right that is bestowed upon the wife/bride unlike the concept of dowry where there is a wrongful liability on the women. It views Mahr as a tool for balancing inequality and providing a voice to women. 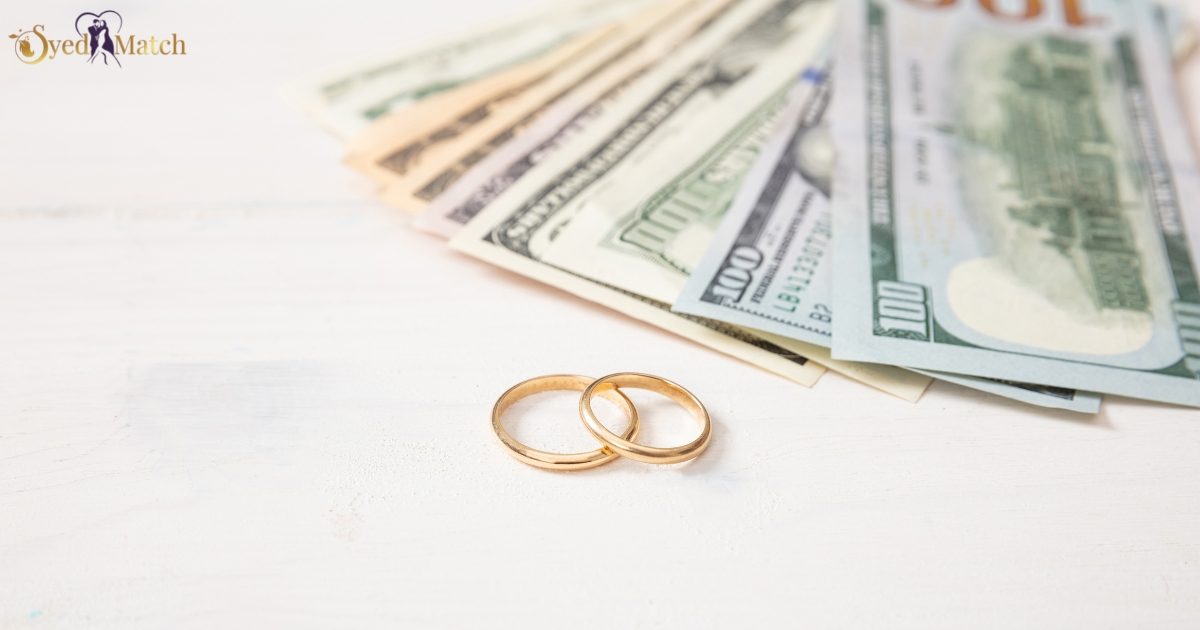 Dowry is a non-Islamic habit that is widely practiced. It includes pomp and circumstance, as well as other nefarious elements. To demand Dowry is haram. As a result, the practice of Dowry should be abolished.

However, it is permissible for daughters and sons-in-law to accept presents if their parents freely offer them out of love.

If we are to observe the marriage of Hazrat Ali R.A. to the exalted Bibi Fatima; He didn’t seem interested in accumulating wealth, and he didn’t insist that his wife ask her parents for money.

There are times when we fail as a society when we ignore the teachings exemplified by the Prophet Muhammad P.B.U.H and his companions. We fail collectively when we allow sadists who treat their wives cruelly turn a pleasant home into a hellish place to live, all for the sake of dowry. Something that they have no right to demand or lay claims to.

It is because of such men and their families who allow it to happen that when we hear the word “dowry” we are reminded of the cruelty to married and unmarried women. A societal ill that leads stifles women and their families into submission by linking their prospective happiness to the amount of dowry given. Simply put, dowry is a social ill that has originated from materialistic greed in order to exact demands from the woman’s family.

What are the Types of Mahr as per law?

In accordance with Islamic Law, dower or Mahr is divided into two bases: by operation of law, which is typically (a) unspecified dower (Mahrul misal), and on the basis established by parties, which is known as (b) specified dower (Mahr-i-musamma), which is of two types (c) deferred (Muwajjal) and (d) prompt (Muajjal)

As the name implies, this form of dower is one that is not specifically stated. It is also known as a proper dower, and in this instance, the husband’s legal obligation to pay. It is independent of any agreement between the parties.

In this situation, there is no specified or agreed-upon amount of Mahr, thus the court determines the amount based on the dower agreed upon by the other female family members.

The criteria that are considered in this process are the personal characteristics of the woman, her age, the social standing of her father’s family, the amount of dowry she received from her female paternal relatives, and the husband’s economic and social standing.

In light of all the issues that may arise due to the unspecified amount, both parties usually decide on an amount prior to the Nikah.

In this type of Mahr, the sum is predetermined through an agreement between the parties. Even if the Mahr is excessive, it must be paid because both parties have previously agreed to it.

There are different schools of thought to respond to situations in which the son does not have the financial strength at the time that the Mahr becomes due. The father is not deemed personally responsible for the Mahr under Hanafi Law, a branch of Islamic law; however, the father is responsible for the Mahr under Ithna Ashari Law, another branch of Islamic law.

These types of Mahr are defined based on the time of payment.

The deferred dower, or Muvajjal, is the dower that is only due when a certain event occurs or when a marriage dissolves due to a divorce or upon a spouse’s death.

The rationale behind lowering the Mahr and not obligating dowry it to make it easier for single Muslims to get married. Doing so would also allow Muslims to live in accordance with the teachings of Islam and avoid committing many forms of social and moral corruption.

How The Custom of Dowry Is So Misused? 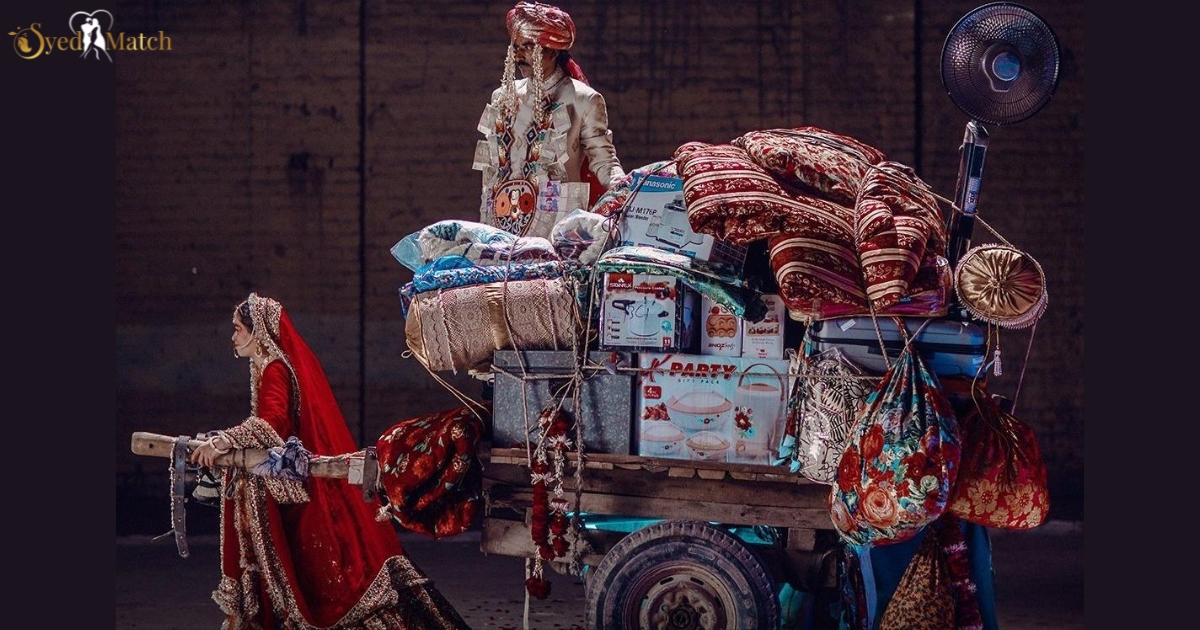 However, the question remains to be addressed even with such elaborate details provided by the Sharia law, why does this evil custom in the name of dowry still exist? The answer is straightforward. It is the responsibility of both the groom and bride’s sides to stomp out this vile practice. Whether it is the practice of asking for outrageous amounts in Mahr or making demands with regard to dowry. Showing respect for each other’s families is essential. If you are entering into a lifelong commitment, then it is best that it is based on honesty and no hidden agendas disguised in the pretext of Mahr or Dowry. 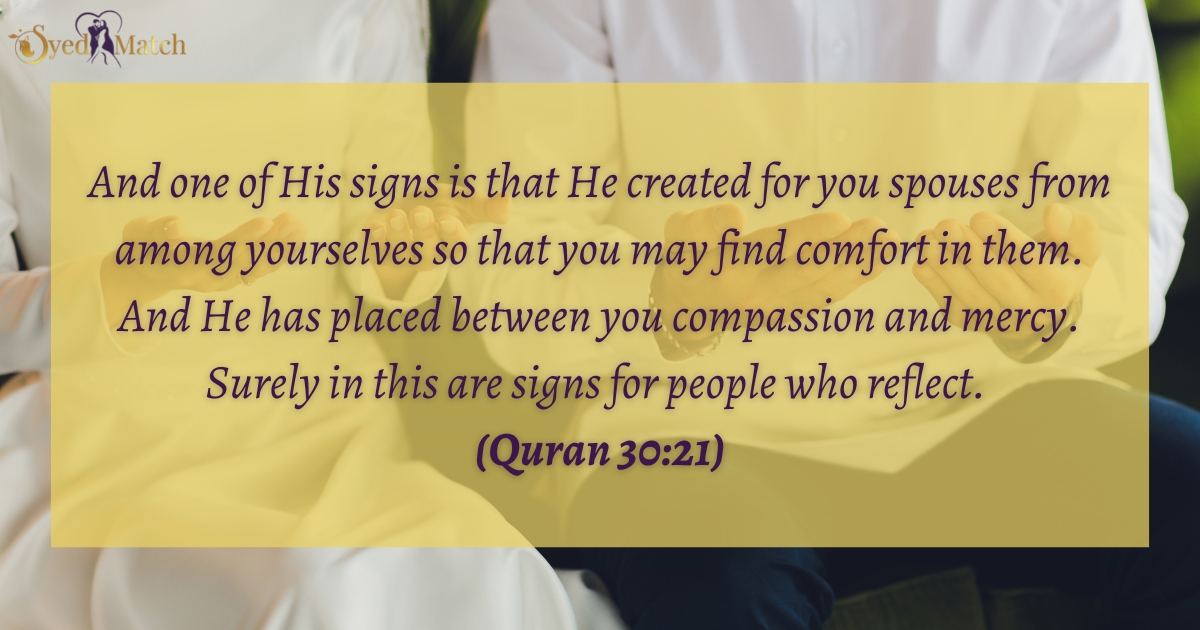 And one of His signs is that He created for you spouses from among yourselves so that you may find comfort in them. And He has placed between your compassion and mercy. Surely in these are signs for people who reflect. (Quran 30:21)

SyedMatch. Com creates opportunities for single Muslims to seek out those that match their mindset and progressive approach toward matrimony. This acclaimed matrimonial website also offers life coaching and advise with regard to many aspects of life. Sign up on SyedMatch.com today and find the life partner that shares your values.